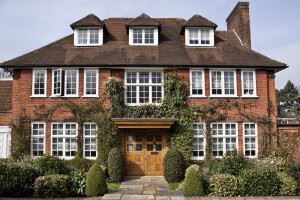 The Georgian era lasted from 1714 to 1837 and takes its name from the reign of Great Britain of the four Kings that were all named George. They were George I, George II, George III and George IV.

At the beginning of the Georgian period, due to huge urban growth, space in towns and cities became very limited. Town Houses started to become more popular and were built singularly or as part of a terrace. The Royal Crescent in Bath is probably one of the most famous terraces in Britain which is a great example of classic Georgian architecture. It is now a structure of approximately 30 houses, a hotel and a museum. Some of the properties have also been converted into flats and offices.

Georgian town houses and terraced properties were built with thick walls of stone especially in-between terraced houses which stopped any fire break-outs spreading. These walls were also strong enough to maintain the weight of chimney stacks, which were added to both sides of the property.  Normally standing over four floors there would be a short flight of steps up to the front door with the most important, grandiose rooms located on the first floor.

Windows were almost always of a sash-window design and the patterning of the windows remained the same all over the property.  The top two floors were square in design, the first floor windows where the grand rooms were would feature tall, elegant windows allowing light to enter into the rooms. The ground floor windows were short windows that were designed in this way to help stabilise the building.

The front door often detailed a fanlight but did not have a letterbox, a canopy would surround the door and if part of a terrace the front of every house would look the same. The properties would always be light and spacious and would look opulent and elegant.

Interior decorations would comprise of wooden floors covered by ornamental rugs – the grander houses would have stone or marble floors – chandeliers with curved centrepiece arms and wood panelled rooms that often reached the dado rail. Mouldings would be intricate and would include ribbons, classical figures and urns in the ceilings. As well as luxurious curtains that had grand pelmets and matched the furniture, most Georgian properties would have solid window shutters to help regulate the light and heat in each room.

Nowadays window shutters can be a great addition to any home, with all the benefits from tried and tested methods throughout the ages. Why not see the different styles, shapes and sizes that are available today, which will suit any property regardless of the period of when it was built.