You only have to walk past any row of houses to confirm that window shutters have rapidly grown in popularity in recent years. They have in fact become such a desired feature that The Times has declared them ‘Britain’s window dressing of choice.’ Read more by following this link – https://www.thetimes.co.uk/article/plantation-shutters-are-britains-window-dressing-of-choice-20dq58nzcxn

With sales growing at a rate of 35% a year and showing no sign of abating, it’s safe to say that this is a trend that isn’t going anywhere anytime soon. Believe it or not however, window shutters have actually been around for a very long time and they have a fascinating history too.

Shutters actually made their debut in ancient Greece where they were originally made from marble. Although this made them incredibly strong and durable, they were very difficult to work with so naturally, this didn’t appeal to the masses. Over time however, wood was used to improve the design and functionality of shutters and as a result, they started to become more popular. 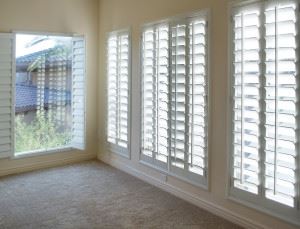 Once the idea of shutters spread to the Mediterranean, their form really began to change and they started to resemble what we typically see today. Wood completely overtook marble and movable louvres were introduced to control the amount of light and air entering a room.

Shutters are older than glass windows

Did you know that wooden shutters have been around even longer than glass windows? Popularised during the Tudor period, shutters were originally made from thick wooden boards and were used to cover any holes in the wall which led to the outside world.

Much like our windows today, they were used to block out bright sunlight, keep out the cold air and keep thieves at bay. Even when glass windows were introduced, it was too much of an expensive luxury for the average person so most people had a half-glass, half-shutter arrangement.

More than just a window dressing
It wasn’t until the 16th century that people started to use window shutters for decorative purposes as well as practical ones. At this time, it started to become increasingly common to see ornamental woodwork being used for decorative purposes in homes across the world.
Once we reach the Victorian period, the walls in houses were no longer as thick as they used to be thanks to the introduction of wood and brick in construction. With the thinner walls came thinner window recesses, enabling shutters to be used externally as well as internally which had been the traditional method. 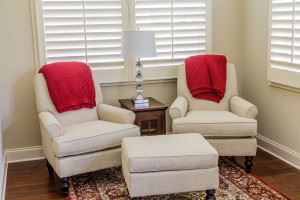 A worldwide phenomenon
As the Americas became colonised, it wasn’t long before window shutters became a must-have over there too. The southern states particularly embraced this trend and they would often integrate shutters into large plantation manors which is where plantation shutters got their name from.

Modern shutters
Nowadays, the range of window shutters which are available to us has expanded greatly. From solid, plantation and waterproof shutters to all sorts of shapes and styles including café, full height, tier on tier, elongated, circle and triangle, these window dressings are well and truly embraced by home-owners all over the world.

See why window shutters have stuck around so long, and book a free home survey to find out more.

Shutters are an investment so we ensure the highest standards of craftsmanship and include a 5 year guarantee.

Friendly surveyors that are local to you.

Experienced and courteous carpenters that achieve the perfect finished install.
Trustpilot
Call us
0800 038 5311