Many studies suggest that the kitchen is the place where germs are most likely to be found so when it comes to food preparation areas, hygiene is of course of the utmost importance.

We’re all familiar with the number one rule of cooking – wash your hands before preparing food. But what else can you do to ensure that your kitchen is as hygienic as it can possibly be? 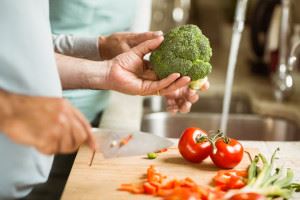 According to a 2012 Lysol Cross-Contamination study, preparing just one meal in your kitchen can contaminate 90% of surfaces touched. Even if your counters look clean, it’s a good idea to disinfect them before and after cooking. Especially if you’re dealing with raw meat but contrary to popular belief, many other raw ingredients can put you at risk of food poisoning including fish, eggs and even vegetables.

Change or clean your washing up utensils regularly

Chances are that you continue to use your washing up sponge until the bitter end. This will of course save you a few pounds in sponges but think about how many times it will have been used by the time it has worn away.

The most unsuspecting source of your hygiene woes has however found to be the humble tea towel. A study carried out at Kansas State University a few years back determined that tea towels are the most contaminated of all the contact surfaces they tested.

To make your washing up sponges and tea towels more hygienic, replace them regularly, disinfect them in a hot wash after every couple of uses or stick to paper towels which can be thrown away immediately. 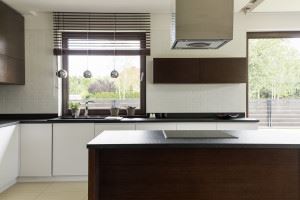 Window shutters may not be the most traditional window dressing for a kitchen but when you think about it, they make perfect sense.

Keep phones out of the kitchen

We know, it’s almost impossible to imagine not having your phone by your side but when it comes to the kitchen, this really should be a mobile-free area.

Most of us carry our phones with us everywhere we go, for some of us, we can’t even visit the bathroom without taking our smartphone. It’s no surprise then that scientists at the University of Arizona (https://time.com/4908654/cell-phone-bacteria/) have found that mobile phones carry 10 times more bacteria than most toilet seats.

With serious pathogens being found on mobile devices including MRSA, norovirus and even E. coli, try to keep your phone out of the kitchen or at least wipe it down with an antibacterial wipe before cooking.

Use the Kitchen Check tool

The Food Standards Agency found that 80% of people they questioned carry out one or more behaviours which put them at risk of food poisoning. As a result, they have created a Kitchen Check tool which offers food preparation tips as well as a checklist to make sure you’re not putting yourself and your family at risk.

For more information about this, head to the food.gov.uk website.